Originating from the Buganese pirates from Indonesia, the legend of the Boogeyman has greatly evolved into the monster seen in modern culture. The monster has always been known to go after misbehaving children, yet the appearance of the monster has varied. In Latin and Spanish countries, the monster carries around a large sack to carry children. In Europe, the monster is depicted as a tall dark man that wears a heavy coat and a hat that covers his face. Today, the creature is depicted as a tall dark man that hides in the shadows and avoids being seen by his victims. However, many different monsters have arisen that resemble the Boogeyman.

A recent variant of the Boogeyman can be seen in the movie Sinister, released in theaters in 2012. The movie follows an investigative novelist as he investigates abnormal murders of families where the youngest child was reported missing. He finds old video tapes of the murders of the families, as well as a disturbing figure in the movies. The figure is later stated to be a mythical demon that preys on the souls of children. Throughout the movie, further evidence is found, and the main character realizes he and his family are in danger. The movie ends with the youngest daughter killing the entire family, recording it, and then leaving with the monster, whom she and the writer of the film call Mr. Boogie. 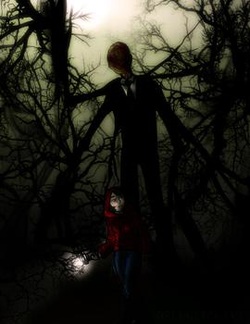 The most recent appearance of a Boogeyman variant originated from a game that can be played online. The monster, known as "Slender-man" is a very tall dark man that does not have a face. In the online game, the monster hunts you down in the forest while your character, having only a small flashlight to use, tries to escape from him. At one point in the forest, you may see him far away, then turn around only to find him standing right in front of you, where he then grabs you and eats you.
The modern legend is that the Boogeyman lives in the closet or under the bed. He exists to eat children who misbehave or cannot fall asleep. He is usually a dark shadowy man whose face you cannot see. The most recent depiction of the Boogeyman in film was the movie The Boogeyman, released in 2005.